Sermons on loaves and fishes 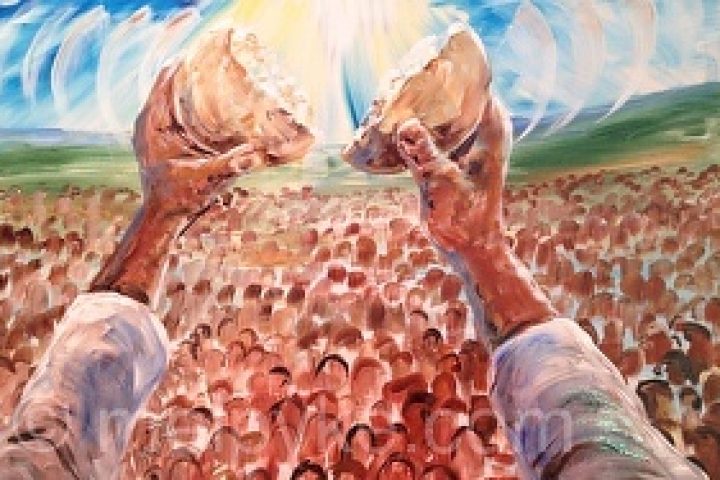 One of the gifts of our Episcopal worship is that there is a 3 year cycle to the lessons we read each Sunday. This means that over the long arc of our lives, the stories become familiar, like old friends we delight in visiting again, acknowledging and savoring the fact that it feels like we’re just picking up on an ongoing conversation, without losing a beat. It also means that when we come upon a particular story, we can notice…
Apr 29, 2017

The disciples took with them their broken hearts, their sense of foolishness for believing in something good, perhaps some hurt pride, because they thought they were right and it turned out they weren’t, or at least at this point in the story. They took all of this brokenness and betrayal and walked away. But Jesus comes alongside them, and they invite him to stay with them, perhaps just as a common gesture of the day, or perhaps because they had a sense that something wanted to be broken open within them. And it was. Jesus broke open the bread and broke through as the Risen Christ. The two travelers broke open their blindness to see another way. The now-disciples gave it all away, by their action of running back to Jerusalem, full of confidence, giving their story and their lives for others, so that bread could be broken for everyone, and all can be fed.
Mar 4, 2017

It is almost unfathomable to me that God leads us into temptation, and yet we pray against that happening each week in the Lord’s prayer as we say, “Lead us not into temptation and deliver us from evil.” If we pray against it happening, it means we must imagine it as a possibility, and one that only the grace or mercy of God can prevent. And our gospel story today reinforces the concept that God leads us into temptation, as it is clearly stated that the Spirit leads Jesus into the wilderness, into the place of testing and temptation. Somehow the time of testing and temptation serves the Spirit’s purpose. Does that seem odd to you?
Jul 26, 2015

There is an adult formation series being offered at St. Andrew’s currently, called “Embracing an Adult Faith”.
Aug 14, 2014

Jesus begins the process of spiritual transformation of the crowd by directing the disciples’ attention away from what they don’t have, to what they do have, and to invite them to look within themselves for the answer, not to look to others to solve the problem, such as the food markets in everyone’s home town. Jesus said, look at what’s in front of you first, and give thanks.
Today SPO Egg Money Collection
Today Preparing to Become the…