Though St. Andrew’s was first established in 1904, Anglican worship in Shippensburg dates back to its earliest settlers. The town was founded in 1730 by Edward Shippen and James Burd, both practicing members of the Church of England, and Anglican services are believed to have been held in local homes and the Shippensburg Building, which served as Cumberland County’s first courthouse, during the first years of settlement.

The earliest Anglican services on record in Shippensburg were held in 1755, when Dr. M. Barton of York Springs paid several visits to Shippensburg to preach and administer the sacraments in accordance with the 1662 Prayer Book of the Church of England. With the assistance of traveling clergy from Chambersburg and Carlisle, worship continued through the founding of the Protestant Episcopal Church in the United States in 1789 and for the next hundred years.

In the early 20th century, John Clifford Phillips moved to Shippensburg from Washington to start a woodworking factory. Shortly thereafter, he helped to found St. Andrew’s Mission Church, so named because of the many local residents of Scots-Irish descent. The construction of the original stone building was underwritten by Mr. Phillips, whose generous bequest helps to support St. Andrew’s to this day.

The Rectory, now the Episcopal Home adjacent to the Church on East Burd Street, was built in 1911. In 1982 a group of dedicated parish members led by Ray Stine constructed the present Parish Hall according to the design of Doris Stine, his wife. Funds from the Phillips Trust combined with contributions from the congregation to make this valuable expansion of the church facilities possible.

In 1992 St. Andrew’s, having demonstrated both financial viability and parish vitality, moved from Mission to Parish status in the Diocese of Central Pennsylvania. Since then the Parish Hall has been expanded to become the Parish Life Center, which includes space for Christian Education, a nursery, and parish offices. The Doris Stine Memorial Library was added in (year) and a Memorial Garden alongside the south wall of the church was created and dedicated in (year). 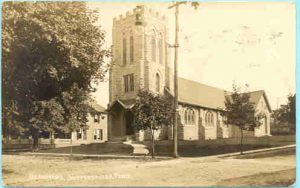 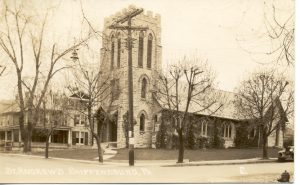 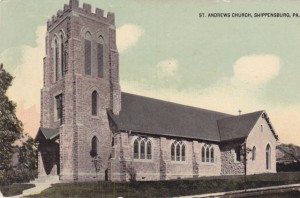